This photo provided by the Irving Police Department shows the homemade clock that Ahmed Mohamed brought to school, Wednesday, Sept.16, 2015, in Irving. Police detained the 14-year-old Muslim boy after a teacher at MacArthur High School decided that the homemade clock he brought to class looked like a bomb, according to school and police officials. The family of Ahmed Mohamed said the boy was suspended for three days from the school in the Dallas suburb. (Irving Police via AP)
Share this...

We have been subjected to one of the best examples of media-manipulation this year has had to offer. Ahmed Mohamed, easily the smartest Muslim boy in the US, has (with immense help from the media and guilted Americans) gotten the entire world to believe a story that cannot possibly be true.

The story that we were told was simple to understand, easy to present, and easy to draw conclusions from: On September 16th, a young Muslim boy brought a clock he invented to school, to show to his teacher’s and classmates. He was arrested for “bringing a bomb to school.” By mid-day, he had been invited to the White House by Barack Obama, the internet was frothing at the mouth over the seeming racism driving the story, and major universities and corporations were inviting him to visit.

I myself cracked a smile at the pictures of his father bringing pizza to the media outlet workers camped outside his house. What a great family, how sad it is that a young Muslim boy was given trouble because of his skin color!

This story is awesome in every single way – for Mohamed that is. There couldn’t be a better way to paint yourself as a victim. In terms of which ethnicity you need to be to milk the emotions and sentiments of the American population at full capacity (five days after the anniversary of 9/11), being a Muslim is without a doubt the first-pick. Would this story have had anywhere near the impact it did if Mohamed was white?

The world reacted exactly as the world should when presented with a story so one-sided that it’s hard to assume anyone working at the school has a brain. How the heck could teachers and school officials call the cops on a Muslim boy for bringing a clock to school? How could the cops come and handcuff him? OH-MY-GOD look how innocent and confused Mohamed looks:

I expect they will have more to say tomorrow, but Ahmed's sister asked me to share this photo. A NASA shirt! pic.twitter.com/nR4gt992gB

What kind of country has America become, when a young Muslim boy wearing a NASA t-shirt brings a clock to school and is arrested?

Let’s now wipe our abused and propagandized minds clean of that ridiculous story, and examine what actually happened. Do not fret, American school workers have not lost all logic, and Mohamed is not some poor innocent victim.

First of all, Mohamed is at best an exaggerating bragger, and at worst a lying manipulator.

Harsh, I know. Let’s hear what Mr. Mohamed has to say about his “inventions” first-hand:

“My hobby is to invent stuff. […] I made a clock. It was really easy, I wanted to show her something small at first.”

Mohamed explains how he was detained, had his finger prints and mug shots taken and his possessions searched. This is horrible, a violation of his rights, but also the expected outcome of his actions within the paradigm of the society he lives in.

He then explains how he put the circuits and the digital display inside of a metal case, and locked it with “a simple cable, so it won’t look suspicious.”

We can actually see the cable he’s talking about, and the device, in a video which explains that Mohamed did not “invent” anything except how to execute the most elaborate fake-youth-inventor plot in American history:

Basically, Mohamed bought a clock, unscrewed the plastic casing, and inserted it inside of a metal box, making it look exactly like a fucking bomb. Remember Mohamed’s story; he brought the clock to school to show to his teacher. According to the New York Times:

He said he took it to school on Monday to show an engineering teacher, who said it was nice but then told him he should not show the invention to other teachers.

His teacher did not sound any terrorist alarms, but did warm Mohamed about what would happen if he… say……… brought the device to other classes and had it make noise. Which is exactly what he did.

Police said the student had the briefcase in his English class, where he plugged it into an electrical outlet and it started to make noise. –WFAA

As the video above explains, Mohamed’s clock uses AC power, as we can clearly tell by the transformer and regular AC plug laying on the table. Given that the device is a clock inside of a different case, it seems apparent that the beeping noise it made after he plugged it in was an alarm. To my knowledge of these devices, alarm clocks never come with alarms already programmed into them.

It would seem to me, and anyone else who decided to look past the headlines, that Mohamed programmed the clock’s alarm to go off, and plugged it in to accomplish this. To recall the original story, Mohamed brought his “clock” to school to show others. Leaving it at the back of the class with an alarm set to cause an international disruption was not in this original plan.

Let’s forget his race for just a minute here, and reexamine the story’s facts. A boy brings a very sketchy looking metal case to school. It starts beeping in class. The anniversary of 9/11 having just passed, terrorism fresh on the mind, the teacher gets worried, and does what anyone who cares about the life and safety of themselves and their students would do and reports the incident. The situation escalates and all Mohamed has to do is explain this silly mix-up!

Officers said Ahmed was being “passive aggressive” in his answers to their questions, and didn’t have a “reasonable answer” as to what he was doing with the case. Investigators said the student told them that it was just a clock that he was messing around with.

“We attempted to question the juvenile about what it was and he would simply only say it was a clock. He didn’t offer any explanation as to what it was for, why he created this device, why he brought it to school,” said James McLellan, Irving Police. –WFAA

I am a libertarian, and I am extremely opposed to hand-cuffing people, to arresting them, to interrogating them and searching their things, when they have not done any actual harm. Unfortunately, the situation Mohamed created for himself could only lead to this outcome.

Terry Jones, a pastor who became famous himself by burning Korans on the anniversary of 9/11, decided to hold a mock “trial” for the Koran. Only one Muslim man (in the entire country) came (from several states away) to “defend” the Koran during this trial. That man was Ahmed Mohamed’s father. It’s a weird story, which you can read here, and more of here.

Elhassan has also tried running for president of his home country Sudan, which is ruled by a dictatorship. Rather than delve into the semi-known motives and dreams of this boy’s father, let us focus on what we do know:

After several hours of debate about the Koran’s true meaning, Jones called an end to the proceedings and listened as a jury rendered its “verdict.” The Koran was “guilty” of “crimes against humanity.” Jones then ordered the book doused with kerosene and burned in a portable firepit.

Elhassan and his family couldn’t watch.

This young boy is no stranger to the issues regarding Muslims in America. It would be foolish on our part to assume Mohamed had no idea what bringing his hoax bomb to school and “setting it off” would lead to. I am confident calling it a hoax bomb. 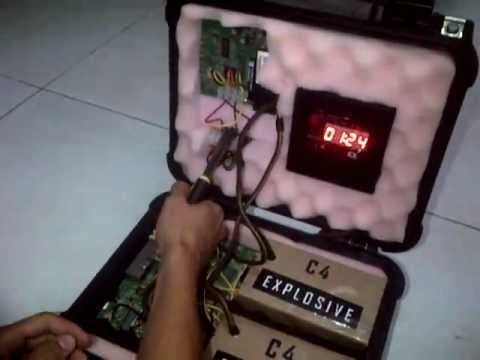 A google image search for “movie bomb suitcase” yielded an image of someone comparing Mohamed’s clock to one from a movie. If I ever see an object like this on the street, beeping, I will not stay to find out if it’s a clock or not. It’s a ridiculous scenario, but my self-preservation comes much higher than my appreciation for clocks that look like bombs.

I congratulate Mohamed for bringing such a fascinating story to the table. Rarely have mere headlines elicited emotions in me, only to turn out to be completely fabricated and misleading. I hold no ill will towards him or his family.

The media, however… The media can’t be forgiven so easily. I myself opened up Reddit that morning and was subjected to the narrative that some innocent schoolboy had gotten arrested for the color of his skin and the mistaken-brilliance of his “invention.” I was subjected to an extremely irrational, one-sided version of the story, in which multiple adult school workers and police officers were belittled and mocked while a boy who lied about inventing a clock and refused to cooperate with police after bringing a fake bomb to school was hailed as a national hero.

White school children have gotten in trouble for drawing a gun or biting a pop-tart into a shape which looked like a gun. This was in no way, shape or form an incident of racism. The events clearly show that Mohamed intentionally fabricated this narrative, ignored his teacher, and escalated the events which led to his arrest himself.

It’s too bad Facebook, Google and Barack Obama are honoring this boy with invitations when there are kids who are actually inventing things out there and not making fake bombs.

Ultimately, this is another big blow to our trust in the media.

iThere are no comments

This site uses Akismet to reduce spam. Learn how your comment data is processed.

Begin typing your search above and press return to search. Press Esc to cancel.